Free Ride is an album by trumpeter Dizzy Gillespie  which was composed, arranged and conducted by Lalo Scfifrin, recorded in 1977 and released on the Pablo label. The album represents the first collaboration between the two since The New Continent  in 1962.  [source]

Although Lalo Schifrin is justifiably praised for his soundtrack work, many jazz purists turn up their noses at his jazz dates, such as his ’60s work with Jimmy Smith and Wes Montgomery. The things that make Schifrin an anathema to the diehards — the huge orchestras, the pop and soul riffs, the general air of over the top theatricality — are all over 1977’s Free Ride, his reunion date with Dizzy Gillespie. (Schifrin had been Gillespie’s arranger in the late ’50s.) In fact, Free Ride is so painfully dated that it’s transformed into cockeyed cool, just the sort of record ironic hipsters should listen to while they’re reading the novelizations of ’70s cop shows that they bought for a bundle off of eBay. Gillespie plays with his usual wit and panache, but most of the time, he sounds like a sideman on his own album; the real focus of Schifrin’s arrangements is the funky wah-wah guitars and ARP synthesizer solos that take center stage on tracks like “Fire Dance” (which sounds exactly like it should be the theme for a Charlie’s Angels spinoff) and the mellow disco of the closing “Last Stroke of Midnight.” Occasionally, Gillespie gets to break out on his own album, with the lovely solo on “Love Poem for Donna” his particular standout. For what it is, Free Ride is really quite good (guests include Lee Ritenour and future star Ray Parker, Jr), but it’s very much a record of and for its time. [source] 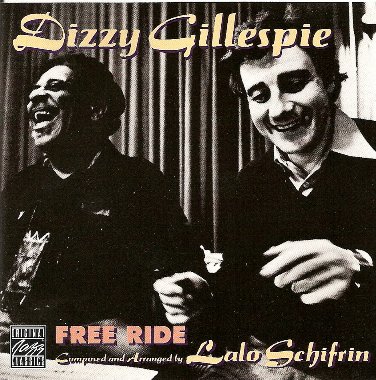