Workin’ with the Miles Davis Quintet is an album recorded in 1956 by Miles Davis. Two sessions on May 11, 1956 and October 26 in the same year resulted in four albums—this one, Relaxin’ with The Miles Davis Quintet, Steamin’ with The Miles Davis Quintet and Cookin’ with the Miles Davis Quintet. Track 2 is a composition written for Davis by Eddie Vinson (see Blue Haze for more details). “Trane’s Blues” (also known as “Vierd Blues”, a tongue-in-cheek reference to Blue Note founder Francis Wolff’s heavily-accented verdict on it), also credited to Davis, is in fact a John Coltrane composition (originally titled “John Paul Jones”, and from an earlier session led by bassist Paul Chambers. Before the closing statement of theme, Coltrane and Davis play a bit of Charlie Parker’s “The Hymn”.) On “Half Nelson”, Paul Chambers plays the bassline on a cello. 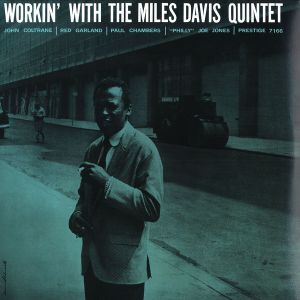