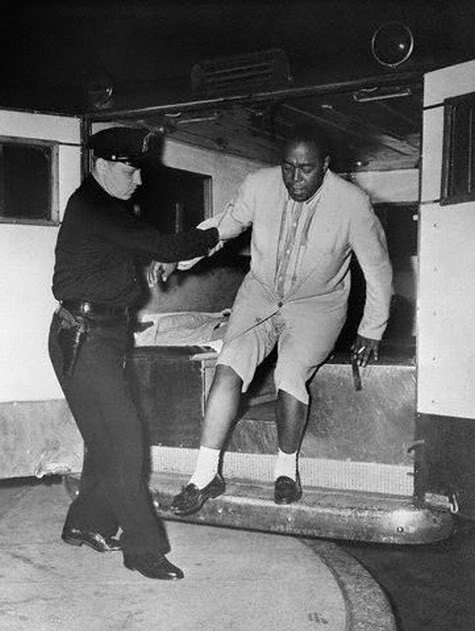 In December 1945, Dizzy Gillespie and Charlie Parker made history by bringing the frenetic sounds of bebop—then primarily an underground scene for in-the-know musicians—from the East to the West Coast for a two-month residency at Billy Berg’s Hollywood jazz club. It was the beginning of a harrowing and occasionally productive two year-stint for Parker bumming around L.A., showing up at jam sessions, crashing on people’s couches, causing havoc in public places (like stripping naked an walking through the lobby of the Civic Hotel downtown), and once in a while standing still for recording dates.

Dope sick from his prodigious heroin habit, Parker could barely function on the lightweight skag circulating along Central Avenue; called “mud,” it was a ghastly concoction of unrefined opium with twigs and dirt still in it. He took to drinking gallons of cheap wine and popping or smoking anything that came his way. Local fan Ross Russell, owner of the Tempo Music Store on Hollywood Boulevard, was a bebop fanatic; he started Dial Records in 1946 specifically to record Parker’s music.

“Relaxin’ at Carmarillo” – Considering the genesis of this tune—Parker wrote it while playing in the Camarillo State Hospital jazz band—this is one of Bird’s airiest and most relaxed performances. That’s L.A. guitarist Barney Kessel on the solo.