“Strange Fruit” is a song performed most famously by Billie Holiday, who first sang and recorded it in 1939. Written by the teacher Abel Meeropol as a poem, it exposed American racism, particularly the lynching of African Americans. Such lynchings had occurred chiefly in the South but also in other regions of the United States. Meeropol set it to music and with his wife and the singer Laura Duncan, performed it as a protest song in New York venues, including Madison Square Garden. The song has been covered by artists, as well as inspiring novels, other poems and other creative works. In 1978 Holiday’s version of the song was inducted into the Grammy Hall of Fame. It was also included in the list of Songs of the Century, by the Recording Industry of America and the National Endowment for the Arts. Abel Meeropol was a white, Jewish high school teacher from the Bronx and a member of the Communist Party. He sometimes published under the pen name Lewis Allan, after two sons who were stillborn. The lyrics are under copyright but have been republished in full in an academic journal, with permission. In the poem, Meeropol expressed his horror at lynchings. He had seen Lawrence Beitler’s photograph of the 1930 lynching of Thomas Shipp and Abram Smith in Marion, Indiana. He published the poem under the title “Bitter Fruit” in 1937 in The New York Teacher, a union magazine. Though Meeropol had often asked others (notably Earl Robinson) to set his poems to music, he set “Strange Fruit” to music himself and the piece gained a certain success as a protest song in and around New York. Meeropol, his wife, and black vocalist Laura Duncan performed it at Madison Square Garden.

Southern trees bear a strange fruit,
Blood on the leaves and blood at the root,
Black bodies swinging in the southern breeze,
Strange fruit hanging from the poplar trees.

Pastoral scene of the gallant south,
The bulging eyes and the twisted mouth,
Scent of magnolias, sweet and fresh,
Then the sudden smell of burning flesh.

Here is fruit for the crows to pluck,
For the rain to gather, for the wind to suck,
For the sun to rot, for the trees to drop,
Here is a strange and bitter crop. 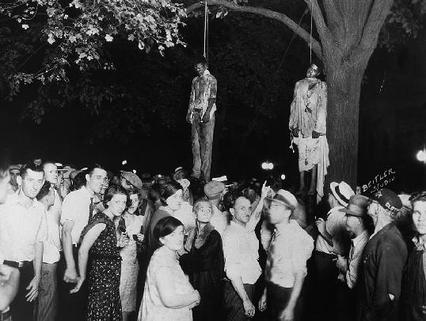