All The Things You Are is from the album Town Hall 1972 by Anthony Braxton, recorded on 22 May 1972 at Town Hall, NYC

For those seeking the deep roots of Anthony Braxton´s numbered series of compositions — numbering close to 200 — this 1972 concert is essential in that it features live recordings of “Composition 1” (for percussionist Jerome Cooper), “Composition 2” (for pianist Frederic Rzewski), and “Composition 3.” This marks a return home, albeit a temporary one, for the composer and multi-instrumentalist — Braxton left the United States for France in 1968, where he made a few recordings for European labels. Braxton showcases his work in a number of settings here — in a pair of trios with bassist Dave Holland and drummers Phillip Wilson and Barry Altschul, and on “Composition 3” (for vocalist Jeanne Lee) saxophonist John Stubblefield and Lee herself become a part of the band. Also in the mix is in a wildly abstract but street-tough read of “All the Things You Are.” On “Composition 1,” Braxton, Holland, and Wilson establish early on what would be a trait in the composer’s improvisations, which is the notion of a theme thoroughly stated, abstracted, deconstructed, and reconstructed into something wholly other while remaining recognizable. Critics have argued this, but those who deny it just don’t listen closely enough. Here Braxton´s first quotations from Warne Marsh make their way onto tape, and his manner of shifting pitch against chromatic and even whole-tone harmonics to create the appearance of diatonic abstraction comes into play as the body of the work. Holland plays away from it, moving toward Braxton´s outer reach while Wilson moves inside the thematic construct, opening it up enough to keep Holland within reach of the subtle shifts some of the improvisation requires for articulation.  [source] 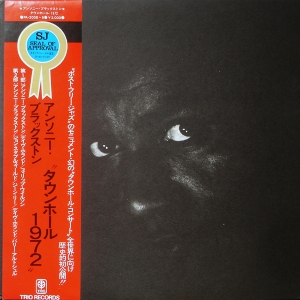 [dedicated as a tribute to Ronnie Rocket]