Nightfall Pieces I & II is track 2 and 4 on the album Intents And Purposes by The Bill Dixon Orchestra.

Intents And Purposes has long been revered as Bill Dixon’s singular masterpiece.  Since his decisive involvement in 1964’s October Revolution in Jazz and lengthy tenure at Bennington College in Vermont (1968-1995), Dixon has been renowned for his skills as an organizer and an educator rather than his pioneering advancements as an instrumentalist and composer. As a former student of painting as well as music, Dixon’s conceptual organization of sound relies heavily on color, shade and texture, with a keen sensitivity to dynamics—aspects that quickly placed him at the creative forefront of the 1960s New Thing. Originally recorded for RCA when he was 42, Intents And Purposes was Dixon’s third album as a leader, following two efforts for Savoy in 1962 and 1964 that were co-led by tenor saxophonist Archie Shepp. [source] 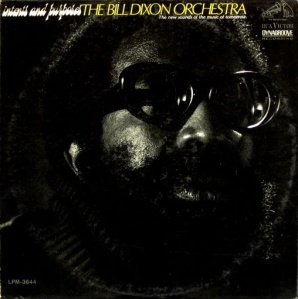